Hi, folks. This strange, new voice belongs to one of the full-time crew members at Abundant Acres. My name is Sydney. I drove out with my husky pup Aster from Thunder Bay, Ontario and joined the team when there was still white fluff on the ground in early April. The Eastern tides were calling! Aooooo. It was long before the ground thawed; before the birds sang; before the buds crept out from their winter slumber. It was a timid spring. We largely focused on nurturing our relations and building a strong basis of communication during this delicious slowness. Being an extrovert leaning introvert, this part of the season was so dear to me and I feel deeply that this sort of emphasis is the reason why our crew ebbs and flows so smoothly most of the time. We had time to lean into our relationships with each other and the place. This sort of connecting is something I have never had in a workplace, and my, my, has it been special.

What brought me to farming? Well, I am a human who has had a notably tumultuous relationship with their mental health, and having a job that demands me to be in my body is crucial. The work does not serve as a distraction for me, but rather as medicine. Certainly, it’s challenging – sometimes I feel totally maxed out – but that’s all a part of the beauty. Farming is pushing ourselves to unexplored limits and seeing ourselves be capable of things we didn’t think we could be. It’s also growing food for the people. It’s all such a beautiful process to witness in ourselves and one another. It’s the healthiest thing I know.

At the farm, I’ve been managing the two fields that host many of our long-season crops: leeks, onions, kale (so much kale!), brussel sprouts, cabbage, and fennel – just to name a few. I care for some hot season crops too, like several varieties of peppers, eggplants, tomatoes and zucchini. My fields are called Fox and Grape. Fox is located at the very back of the property, nestled in the centre of a gorgeous, varied lot of trees and is situated Cogmagun riverside. I frequently share waves with fisherfolks cruising by and calls (that are rarely returned, might I add) with the hawks and eagles that I so graciously share this space with. Fox is the home of our famous 400 foot long, substantially sloped beds. In the pathways between beds, we lightly tilled the soil and planted clover seed. Clover is known for its carbon sequestration and nitrogen fixing powers, and has grown beautifully despite notable amounts of foot traffic during the first days of its life. Grape is separated from the Fox field by a thick stand of trees and is operated in the same system. Both fields are irrigated entirely with drip tape (a system that allows water to evenly drip out of a tiny pipe down to the plant roots), and the mulch we use really helps with moisture retention. We just started harvesting from these fields a couple of weeks ago, so Warehouse shoppers, know that your celery, chard, big kale, parsley, fennel and zucchini grew up under the supervision of some of the most beautiful skies I have ever known.

My biggest interests in farming are in regards to radically reimagining the systems that govern food access & sovereignty. I don’t know these territories called Nova Scotia very well yet, which belong to the Mi’kmaq people, by the way. I’m still brand new and am still carefully and quietly observing how everything works (and doesn’t). But I’m interested. And I feel totally supported and encouraged by this community at Abundant Acres to keep exploring my roles and responsibilities as a white settler growing food on Indigenous lands – and I absolutely LOVE the unconventional nature of that, while acknowledging that at some point it must become conventional. I love the unconventional nature of living with my bosses. I love the unconventional nature of being a woman learning about and using machinery. I love the strange non-verbal interactions between the crops and I. Feeling like they know me, and I know them. These lessons are invaluable, and my gratitude to this place is boundless. I hope you can feel that love in your food. I really do.

Enjoy summer’s colourful gifts and I hope to meet you soon.

Aster in the front field in April.

Fox field, with leeks planted in mulch, and pathways between beds about to be planted with clover 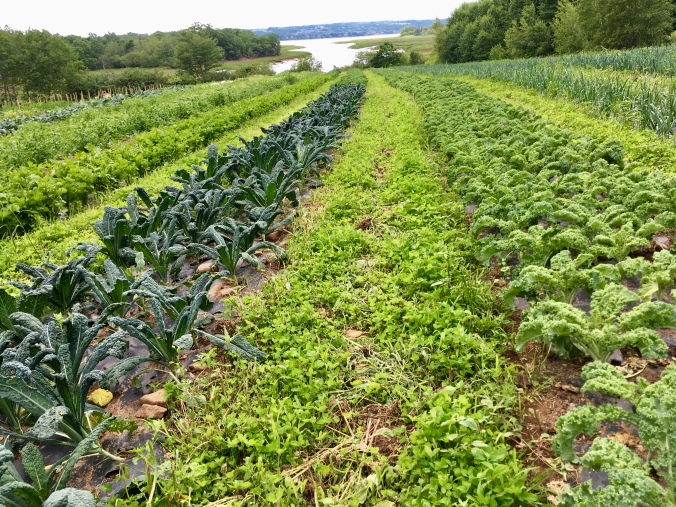 Gotta get those tomatoes trellised!  Justin and Kim 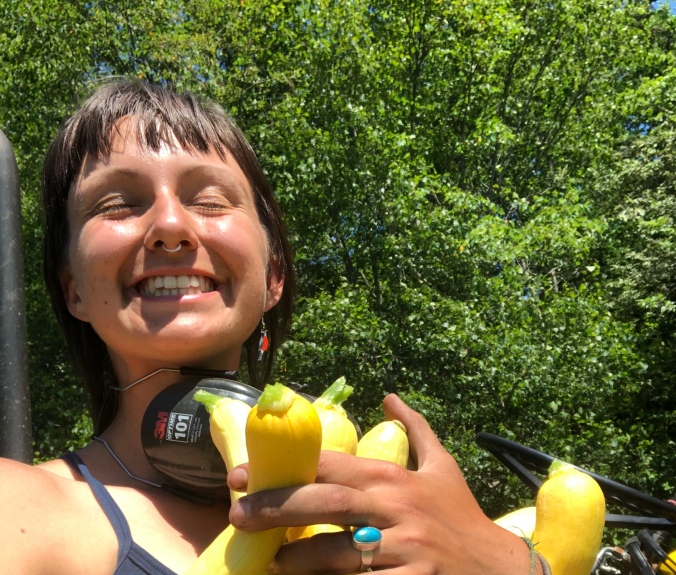 4 thoughts on “(Some) of the Honour(s) of Farming”