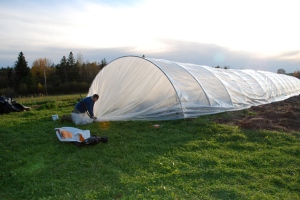 I hope the wind stays down until the ropes are on

Late this fall we put up a hoop house based on a design by Todd Hanley, a market gardener in Oklahoma.  It is very light, easy to build and inexpensive.  Only thing is that it’s not engineered to take a snow load like we often get up here in the Frozen North.  Instead of attaching the plastic to the endwalls like Todd does, I gathered the plastic and tied it to two T posts out from the end of the house.  This allows the plastic to be pushed over to one side in just a few minutes and re-covered just as quickly.  Last week the house was uncovered for the winter.  The plan is to put the cover back on in late February and plant in the beginning of March. 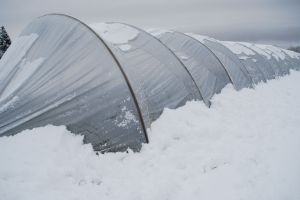 The hoophouse is uncovered, but the kale will be covered again in February.